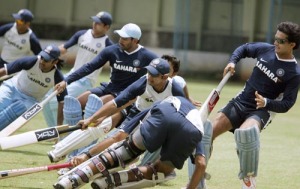 The Indian team prepare for one of the toughest series after the World Cup. Even though they beat Bangladesh in both tests and one-dayers, Rahul Dravid would be the first one to admit that England would be a different proposition altogether. The Indian team is without a coach for this tour also, thanks to the coach hunting fiasco by the BCCI. The board has not made things easy for themselves and the team with a very poorly conducted selection process which caught the attention of the media world over for all the wrong reasons.

Rahul Dravid has already mentioned his concern over touring England without a coach and also regarding the teams preparation. The good thing about this series is that India got to play South Africa in a three match series in Belfast, Ireland in similar conditions to what they would be facing in England. India won the hard fought series 2-1 and registered their first overseas series victory against South Africa. This series should give India the much needed confidence before the all important tour.

The Indian team selection for the English tour had little surprises, Sehwag was dropped from both the one-day and the test squads as expected. The problem with Sehwag was not the lack of runs itself but the way he had been throwing his wicket away after getting promising starts. The recently concluded Afro-Asian cup was an example of the same. Sehwag got to decent starts in the first two games but played atrocious strokes to get himself out. Harbajan Singh and Pathan were the other notable absentees from the Indian touring party, more so due to their lack of bowling form in the past few months.

The Indian team would be relieved to see Sachin scoring some runs in the recently concluded series in Ireland, in the meanwhile crossing yet another milestone. Sachin became the first batsman in One-Day internationals to cross 15000 runs. A great achievement when you consider that he still has a batting average of 44 and a strike rate of 85. The Indian team would take lots of positives from the series against SA, as most of their batsmen made runs and would also be happy with the performance of Zaheer ahead of the test series. Anil Kumble might be the lone spinner in the team with Sreesanth, Zaheer along with another medium pacer would form the bowling combination atleast for the first test.

The Indian batting order might face a few headaches with Yuvraj scoring some valuable runs in the one-day series, making it very difficult for the captain to leave him out of the playing X1 for the first test starting on July 19th.Well all in all the Indian team would want to finish this tour by winning both the Test and the one-day series against England. Captain Rahul Dravid would be hoping that the seniors in the team including himself, can inspire the team to achieve success on this tour.