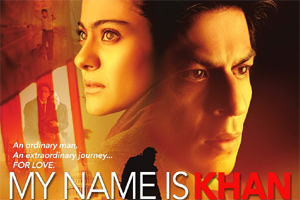 My Name is Khan was a good effort from Karan Johar

After the hype generated for “My Name is Khan” by the Shiv-Sena threat and SRK himself after he got detained at the Chicago airport for questioning, I thought to myself what could be so different about a Karan Johar movie? But after watching the movie yesterday I was pleasantly surprised. I never liked Karan Johar type of movie making. His movies are monotonous and his hero worship of Shahrukh Khan often gets on my nerves.

This movie though was completely different from his other efforts in the past. The movie is heavily inspired by “The Rain man” where Dustin Hoffman had played the role of a person suffering from Autism brilliantly. Shahrukh has copied the mannerisms of Dustin Hoffman to perfection and also speaks and behaves exactly like Raymond (Name of the character Hoffman plays) of Rain Man. His repeating of some sentences, avoiding eye contact and also the way he walks are heavily inspired by Dustin Hoffman.

Even though MNIK (My Name is Khan) also has a Tom Cruise sort of brother for Shahrukh’s character, but the similarity ends there. This movie is mostly based on the 9/11 tragedy and one man’s endeavor to meet the president of United States to say “My Name is Khan and I am not a terrorist”. So this movie is about an Autistic Muslim man (Shahrukh Khan) who wants starts off in search of the president of USA after his step son’s death.

The movie on its own was very good and the lead actors performance was very nice. Jimmy Shergil as Shahrukh’s brother was absolutely wasted in a role which seems to have been created just to get the protagonist to US. Shahrukh as Rizwan Khan was absolutely brilliant and has carried off his role with élan. Kajol though doing a good job, has played a character which she has done before on numerous occasions in Karan Johar movies.

The others in the movie are just adequate and do their roles as required. Karan Johar as a movie maker has surely made me change my opinion about his capabilities and I hope that this marks a turning point in his career. Shahrukh also has gotten away from his stereotypes and has tried something different which he had not done since Swades. Overall MNIK is a great effort. Even though the movie suffers from certain clichés associated with Indian cinema, the overall message doesn’t get lost in the same.

I never thought I would ever say this about a Karan Johar movie but I definitely liked this one and I hope that this is his foray into meaningful cinema.

1 thought on “My Name is Khan is different”