So we are in the finals week at last. American Idol which started way after Airtel super singer just crowned their winner last week. That shows how fast AI has moved since it began. Airtel Super Singer though has been stretched a bit too much and I did not even bother watching the show last week where the contestants met Yuvan for the first time.

Coming back to this week, the competition is going to be interesting. To be honest with you guys I did not get a chance to watch the show on Monday as I was not in town. I heard from one of the regulars to my blog that Ranjani has been eliminated after the classical round which is rather surprising and shocking to say the least.

Ranjani is one of the better trained singers in the pack and it’s rather surprising that she has to leave after the classical round. Well I will be watching the show from the second day and will comeback with a better post tomorrow. The singers left in the show are Renu, Ajeesh, Prasanna and Ravi. Even though Prasanna is my favorite, I would like Ravi or Ajeesh to win the competition as they are the most talented of all the finalists.

Anyways best of luck to all the singers for this week and let’s hope the best singer wins.

As I expected Anoop was eliminated last week along with Lil. I was really surprised to see that Matt was safe and Allison ended up in the bottom 2 along with Anoop. It seemed inevitable for Anoop though as he had ended up in bottom 3 for three consecutive weeks before this and the case was similar for Lil too.

As soon as Allison and not Matt ended up with Anoop in the bottom 2 I knew that it’s Anoop’s turn to leave the competition. It has been an incredible journey for Anoop and he made it to the top 6 which was a brilliant effort by any standards. Well as for me it takes a little bit of interest out of this year’s AI. Anyways good luck to Anoop and hope he does not give up singing.

Anoop enters top 6 and goes one better than Sanjaya in American idol but only for a few minutes as Matt was saved by the judges to make it Top 7 again. Anoop once again ended up in the bottom three joined by Matt and Lil yesterday. He along with Lil were sent to safety one after the other leaving Matt to sing for life.

Matt performed okay yesterday and it seems like the judges had already decided to save him and that’s what they did. Matt rejoins the pack and it remains top 7 for another week. So the much hyped save has been used this season and there is none available anymore. I guess there will be two eliminations next week and I am thinking that Anoop has very good chance of being one of them.

He has been in the bottom 3 for three weeks in a row now and if he finds himself again there, he might not make it. I hope that he does make it to the top 5. We have to wait and see though. Good luck to him.

Anoop gave a stunning performance yesterday and at last chose the right song. It was a fantastic performance and made all the four judges say that his was the best of the night.

This was good for Anoop as he was ordinary in the past couple of weeks and this was a good comeback. I am sure that he will be in the top 10 and hopefully will keep up the good work.

American Idol tonight and me cheering for Anoop again. I hope that he puts in a good performance tonight. He has to impress the judges with his song selection in tonight’s show.

They had chosen him as the extra member in the show based on his ability and personality. He for sure showed his personality in the last couple of rounds but fell way behind in the performance. I hope that he corrects the same. 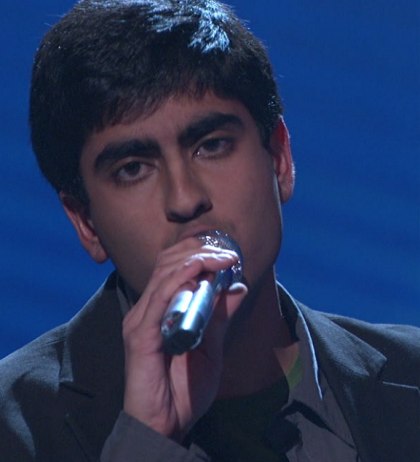 Anoop Desai makes it to top 13 in American Idol

Anoop Desai makes it to the top “13” (Yes that’s right 13 and not 12) yesterday in the Judge’s wild card round. When Anoop’s name was not called out in the end I was little bit disappointed but when Simon asked him to stay and told him that they have decided to make is top 13, I was like everyone else surprised but was elated. I thought that Anoop deserves to be in top 13 more than Sanjaya did.

I hope that he makes it to the top 10 and keeps going. Only thing he has to make sure is that he chooses the right song which suits his voice. Well now I am really looking forward to the next week’s show and I hope Anoop does justice to the selection.